Can you give an introduction to your collaborative work and how your respective practices connect?

We have been communicating between our respective homes (in the UK and Canada) since the end of 2016, digitally and by post – developing a project entitled ’S’ about transatlantic communication and virtual travel. We have exhibited material from the ’S’ Project at a number of locations, most recently at the Queens Museum New York and as part of the Arts Territory Exchange touring archive. We have never met in person.

Our respective practices share common interests in ideas of travel, mapping and navigation and wider investigations into ‘place’ and re-configurations of place and locality in relation to feminist and post-colonial narratives.

Carly’s practice in the main, is concerned with the re-interpretations of nautical knowledge; she works with navigation symbols, meteorological codes and nautical insignia to investigate themes around travel, its labours and dangers. These themes resonated well with Gudrun’s practice which considers the cultural and literary associations of walking and journeying (road trips etc), and seeks to re-configure them to include, feminist and ‘other’ itinerant practices. These concerns overlap in a collaborative practice borne out of the shared experience of parenthood and the subsequent re-evaluation of domestic space, travel, personal location and isolation.

We met through Gudrun Filipska’s Arts Territory Exchange project (https://artsterritoryexchange.com/), a global network of connected topographies, particularly focused on those in isolated places and addressing the problems and opportunities of remoteness. 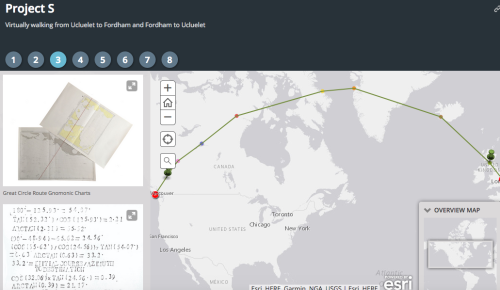 Your project involves a combination of real and virtual walking, and draws upon the interconnectivity of these realms, could you explain a bit more about the work and these dualisms?

The S Project  involves a combination of real and digital walking and various mapping techniques including celestial and circle route navigation. In its simplest form it is a digital map which tracks the steps we take around our respective domestic locations while our ‘avatars’ walk carefully designed routes between UK and Canada, in its expanded and ‘material’ form the ’S’ Project Archive includes various maps,  navigational calculations and processes, a series of prints, photographs, collections of soil and seawater as well as performance documentation.

The title of our project references the first transatlantic wireless signal sent from Cornwall to Newfoundland in 1901. The message was simply the morse code signal for the letter ‘S’.  We are interested in the idea of coasts between us as spaces of connectivity- where fibre optic cables facilitating digital communication rise from the sea and also where morse code messages were first transmitted – The internet itself is viewed very abstractly often spoken of as ‘being in the air’ or being ‘everywhere’ but it has very concrete manifestations in huge servers and miles and miles of undersea cables, so there is always a immaterial/material dualism involved in digital work any way. The virtual/material dualisms within our project are also representational of our current limitations as artists/ parents with ties to domestic space, and imply an ambivalence towards assumed identities generated around motherhood. At this point in our careers, for financial and reasons relating to the domestic, It is not easy to travel. At a time when we see male counterparts are forging ahead with their careers on artist residencies/expeditions etc, we wanted to look at the idea of non/travel or restricted travel as a possibly radical or subversive act. In the S project we present the circular/fugal and domestic walk as critique of the idea of the ‘globe trotting artist’ as marker of success, and challenge the attendant requirements of money and mobility. The physical objects in the archive, seawater soil, stones etc, represent the physical realm of our real lives traversing domestic territories – the digital map and pedometer step count listings represent the transferal of our real life pedometer steps to a variety of fantasy journeys and routes so the dualities are as much reality/fantasy as as real and virtual. 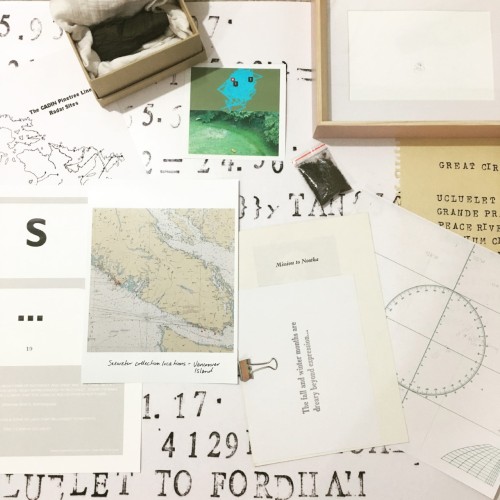 How does your work consider the impact of the digital age? Particularly through the motif of the ‘avatar’ and your map’s reference to online gaming worlds?

The idea of signal sending is key to this work – early transatlantic communication – such as the experiments by Marconi that the S Project references were of course the early pre-cursors to any contemporary ‘wireless’ communication, and the ideas of distance and proximity that we explore in the project are currently more relevant than ever; more broadly the project plays with the ideas of isolation and connectivity which are huge contemporary themes.

We are interested in what lies between – whether it be the space in which the collaborative work happens or the terrains between us on the S Project Map. The idea of time is also important, and we play around with conceptualising the localisation and ‘presence’ of our virtual forms; it is important to us that our avatars exist as markers, mirroring the distance precisely that we ourselves walk and across trajectories precisely measured, with co-ordinates and preplanned routes and are not arbitrary wandering symbols.

As mentioned, our project plays with the duality between the digital and material. The material archive attached to the project represents research into our own domestic localities, their histories and ecologies. These dualities of the public and private realms foreground the project – on one hand the virtual as ‘limit of acceleration’ that Virilio talks about in terms of time and speed (our avatars are available to view anytime anywhere on their virtual map), but behind that the project’s interest in anachronistic and very physical navigation techniques (nautical/celestial) fuel the avatars path and conceptually mark a conceptual ’re-grounding’.

The engagement with celestial navigation in particular, is a way to both subvert and critique our over-reliance on GPS and smartphone technology, and also regain some control over how we engage with the world in a practical and physical way.

In the VR realm, discussions around identity and gender often refer to the ‘Proteus affect’ a taking on of characteristics represented by an avatar’s visual characteristics. Our avatars are just simple featureless ‘markers’ but the idea of fantasy projection is one we embrace. Instead of fantasy appearances though, our avatars have the agency of travel and movement- they inhabit spaces in which we can momentarily see ourselves, in this context the avatar is a way of de-localizing or de-stabilising our own locality to give some distance in being able to better critique it. We maintain the right to exist in two locations, playing with the slipperiness of subjective representation used in many popular VR Games. 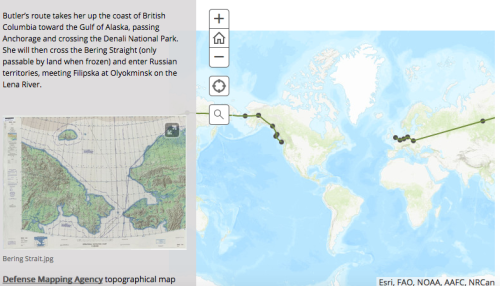 Carly Butler is an interdisciplinary artist who lives and works on Vancouver Island in Ucluelet, British Columbia. Her practice reinterprets nautical knowledge around navigation and journeying and is often text-based and instructional in tone, implying solutions or directions for unnamed problems. Carly has an MA in Art History and studied fine art at Central Saint Martins in London. She recently completed a BFA at the Nova Scotia College of Art and Design and was a finalist for the prestigious RBC Canadian Painting Competition in 2014. Recent exhibitions include Anywhere Else at Campbell River Art Gallery, and Bedlam and Balance at ArtYard in Frenchtown, New Jersey. She is currently completing a course in celestial navigation and is basing a new body of work on this process. carlybutler.com

Gudrun Filipska is an artist and researcher living in the Fens Uk, she is of Welsh and Polish descent. She has a BA from Central St Martins, London and an MA from Middlesex University London. Filipska has undertaken doctoral research into the transient histories of the European route of Industrial heritage – a project which is ongoing. She has recently undertaken an ‘Artist Residency in Motherhood’ for which she received a ‘Red Thread Grant’ and  ‘GPS embroidery’, a project supported by LADA (the Live Art Development Agency) the Arts Council and Jersey Arts Trust. She has exhibited her work internationally and is also the founder of the Arts Territory Exchange, an organisation which facilitates creative collaborative exchange across borders and fosters ideas of ecology and sustainable practice. gudrunfilipska.com/